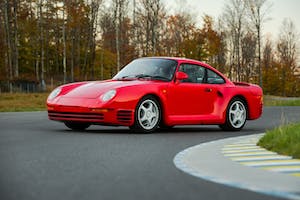 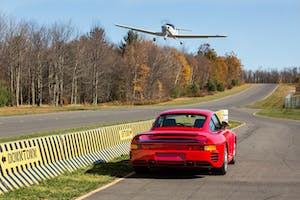 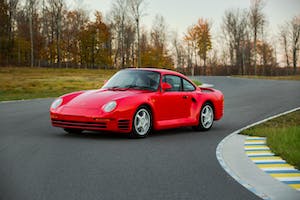 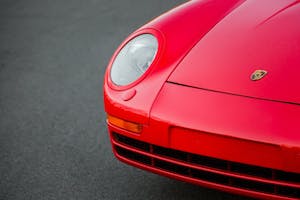 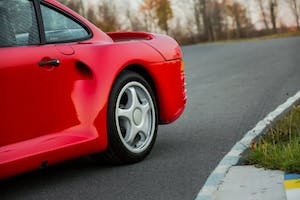 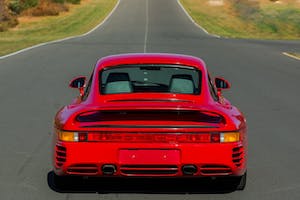 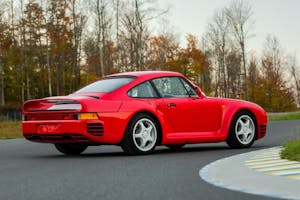 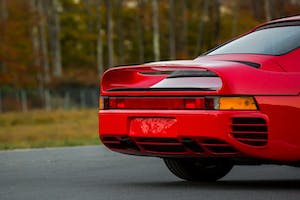 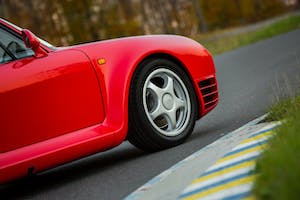 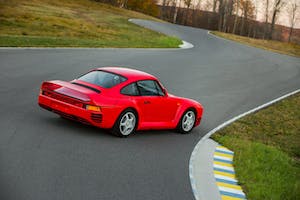 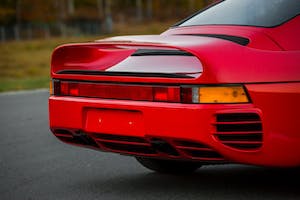 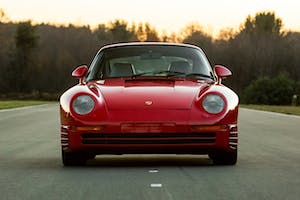 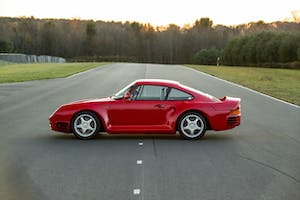 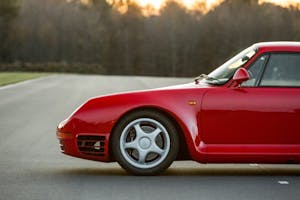 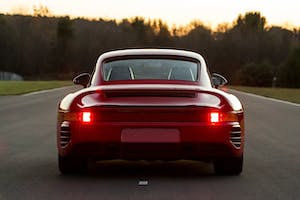 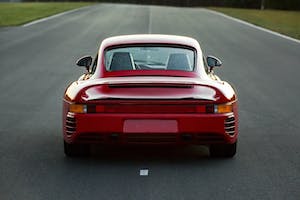 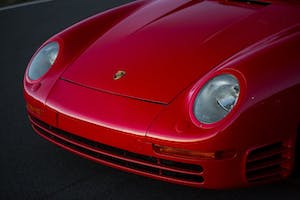 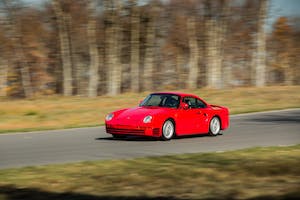 The age of the modern supercar seems to be upon us. Not only from an emerging generational appreciation for these titans of speed and technology, but also in the ever growing market place. Where an overwhelming sense of new investment and appreciation is benchmarking the once seemingly defined nature of the car hobby. Things that were new, not all that long ago, are now “old” or at least collectible and the machines themselves are a marvel to be desired and respected as the automotive world endlessly endeavors to improve upon its creations.

The Porsche 959 in many ways is genesis for a wide variety of what we see today, not only in supercar technology, but also in more casual road going technology. Like all great road cars, the 959 was born from a need to go racing. In this instance, it was the requirement from the FIA for Porsche to build 200 road going units of their 959 Prototype to homologate their efforts in Group B Rally. Porsche set out to redefine the application of modern technology on 4 wheels and did so with some mind-blowing facts and figures never before seen in a passenger vehicle let alone a performance car. The 959 represented a first for implementing systems like ABS, adjustable ride height, adjustable suspension dampening, variable turbine geometry turbos, the use of Carbon Kevlar and other composites during construction and even lightweight hollow wheels. All while preserving modern comforts without sacrifice. The list of intricacies and firsts is very long, but it all adds up to perfection and a truly unique experience.

As the story goes, the 959 did hit a bit of a road bump when the reality was apparent that no cars would be allocated to US Customers due to the cars non-conformity with DOT and EPA regulations. A handful of cars did make it to the states via Holbert Porsche but remained in the back of the dealerships lot until it was affirmed that the 959 was to remain illegal and all were sent back to Porsche in Germany. It wasn’t until the Show & Display Law was passed in 1999 that a few adamant collectors/enthusiasts were able to successfully import examples. Bill Gates, Paul Allen, and a few others benchmarked this effort during those years. Fortunately, and likely part of the reason for the ever increasing value, the 25-year exemption is now in effect for 959’s and they can be brought in and out of the US like any other “old car”.

The 1987 Porsche 959 Komfort on offer is the 36th of 292 production cars, and was delivered new by Porsche Cars AG to its first German owner, a Mr. Haverkamp on October 12th 1987. The car was delivered as viewed today finished in Guards Red with a Triple Grey Interior, German Specification, Heated and Electrically Adjustable Sport Seats, Alarm System, and Bridgestone Tires. The accompanying US and UK Certificate’s of Authenticity confirm this as well. According to what history accompanies the vehicle, we know the car received very little use over the years and the next instance of record is that in 2001, when ownership is recorded with a Mr. Veniaminovich of Moscow, Russia. During this ownership, the care of the car is evident through the continued reported servicing first at Porsche Centre Hamburg at 13,556KM. Reportedly, in 2003, the car received additional servicing at a Porsche Dealer at 27,114KM, also under the then current ownership. In 2010 ownership transferred again, along with further ownership transfers in 2011 and then finally with the most recent collector in 2014, also in Russia. It was acquired soon after by Tom Hartley Jnr, a well-known purveyor of special interest automobiles located in Derbyshire, England. Under Mr. Hartley’s care the car received considerable servicing to bring it up-to-date as a turnkey example. A comprehensive work order was carried out at Porsche Cars Reading, UK with the following systems/items tended to:

All services, in total, resulted in a near $30,000 worth of invoices being spent on rectifying any and all outstanding mechanical issues of any kind. Putting this 959 in superb order as a ready-to-enjoy, investment grade example. The odometer showed 34,745KM at the time of completion in late December 2014.

Shortly after LBI Limited acquisition, on July 25th 2015, a US Customs Entry Summary states this example’s official import into the US, with taxes paid, and a clean US title was issued only a short time after. We had the pleasure of welcoming this 959 to the US by a proper journey home directly from the container, onto the open road and back to our facility in Philadelphia, PA.

Upon our acquisition we had the car inspected with no items of major concern noted beyond replacing the timing chain tensioners and tightening a cooling hose. Everything about the car is in proper working order. The car starts easily, idles nicely and once up to temperature is put to use without a fault. This example pulls strong with consistent temperature readings and strong oil pressure. It brakes well with no pulling and the steering is precise with no issues noted. The suspension dampening is effective and the adjustable ride height a very interesting experience, but useful at times. Overall, it is a unique experience that when put into perspective, as a car from the 1980’s it really does impress upon the driver. The 959 is easily an experience reminiscent of a car from the early 2000’s. In short, it was way ahead of its time and a true joy to drive.

Cosmetically, this example does show signs of use and enjoyment consistent with the mileage. There are a few small blemishes to note behind the rear wheels on the underside of the rear fenders, a chip or two that has been touched up on the front bumper as well as a small scratch on the drivers fender. A small touched-up chip near the driver’s door edge is also present. Otherwise it remains in exceptional cosmetic condition and exudes a certain honest originality in its presentation with original paint noted everywhere except the drivers front fender towards the lower front which is suspect but only to the point of minor touch up/blend work, likely from a previous minor blemish as the car retains all of its original panels. All acceptable and consistent with the mileage and for a car that is inviting to use and enjoy, an element many supercars lack. The Porsche 959 continues the tradition like that of other Porsches- A car to be used and enjoyed, reliably so, and without fault.

The interior is very interesting as 959 interiors, depending on the specification ordered, came in leather like we have never seen on other Porsches. A slight sheen and a very 1980’s appeal and feel throughout, consistent with the use of new and modern materials in the rest of the car. It is tidy, clean, well kept and highly original. The only exception is that of the radio which is a period correct McIntosh sound system, fitting in a ironic way for the period complete with CD Player. All of the knobs, pulls, switches and surfaces are in excellent condition with no issues noted. Everything is in working order with all systems functioning as designed.

The Engine bay carries the same level of consistency as the rest of the car, signs of use, but overall very nice, clean, and obviously cared for with nothing out of place and everything in its stock, as delivered configuration. The underside is of the same nature. It sports consistent under body pans from front to rear, once removed original cosmolene, factory markings and the technological underpinnings are revealed. The front trunk, at a first glance, looks much like that of any 911 but the moment once starts to remove the carpeting there is an overwhelming sense that the entire front trunk is packed with space age componentry and support systems for the rest of the car. Conducive to the rest of the car, it is a well-engineered space that remains totally untouched as original.

Included in the sale are the following items: owners manual, workshop manual, multiplier wrench, jack, hazard triangle, tire compressor, tire pressure gauge, tools, white leather gloves, belts, towel, and the appropriate leather pouches to match. This is no doubt the time to consider acquiring one of the original 1980’s supercar icons before value trends increase to a point that deem this acquisition impossible. The 959 represent the beginning of imaginative innovation, and thus the 959 will continue to represent the start of the supercar era. There is no track record for these modern investments, but there is an ever-increasing level of interest, investment, and emphasis on their importance and place in the automotive hierarchy. As such, this is an opportunity worth much consideration or a potential moment of future regret.