"If you love the soul of an Alfa, the practicality and drivability of a BMW, and the feel of Porsche close to the limit, an M coupe is the car for you..." 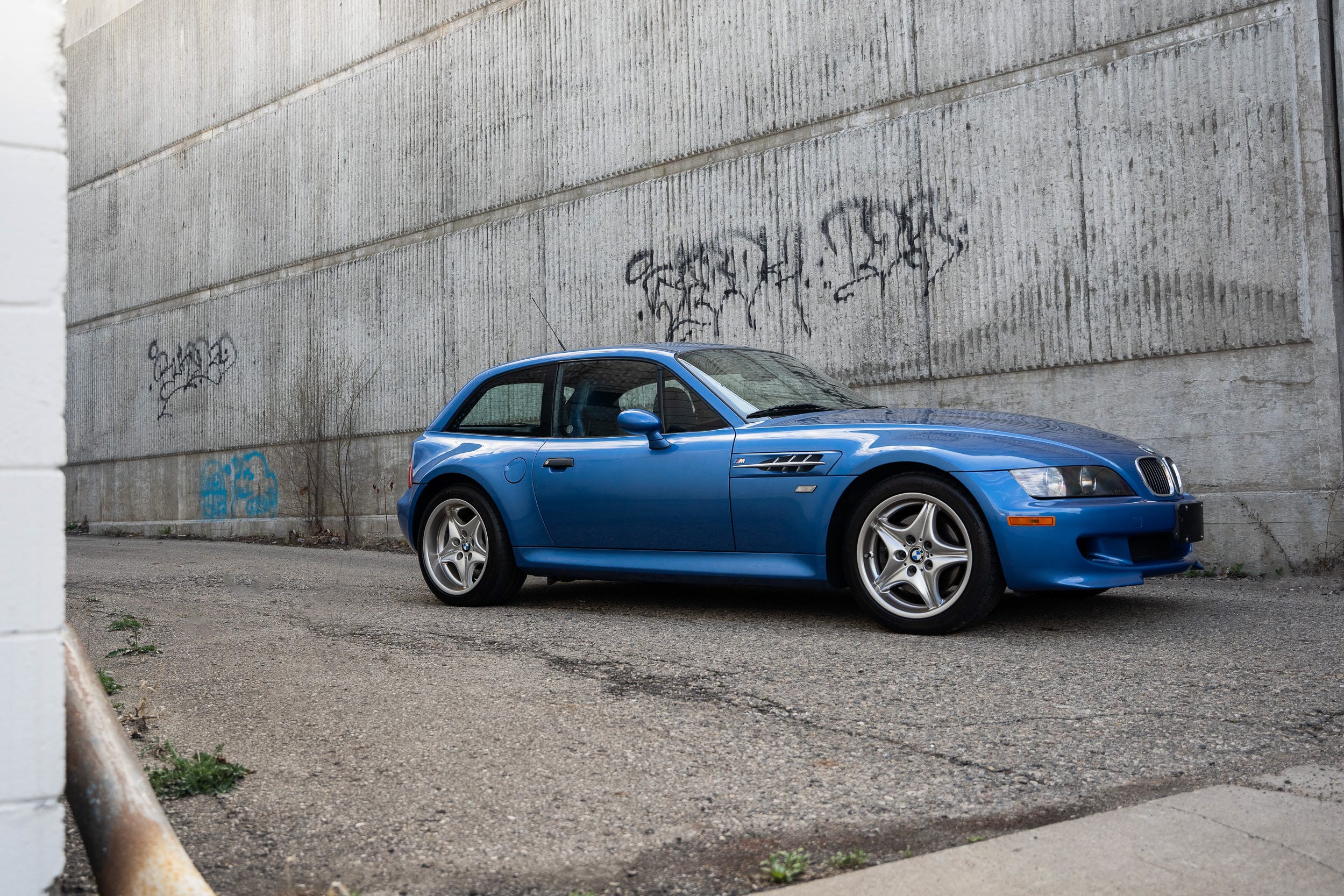 There are several factors to consider when assessing which cars will go up in value next. As the old adage goes: All valuable things are rare, but not all rare things are valuable. While the BMW F10 5 series Gran Turismo that debuted in 2009 is very rare, there just isn’t a high demand for them despite their excellence. Another big factor for a collector car is reliability and cost of maintenance. The easier a car is to maintain, the easier it is to justify it taking up precious garage space. Some could argue that the F355 Ferrari is one of the best ever made, yet the values are held down compared to its brethren simply because they are known to be a pain in the wallet. The last factor to look into is driving experience. I recently drove a 575hp Jaguar SVR, and while it shoved me into the seat the few times I was able to mash the throttle, I would have had more fun in a base Boxster for 95% of the drive. Cars that have gone up in value over the years are cars that bring excitement and joy without needing to be driven at the limit. 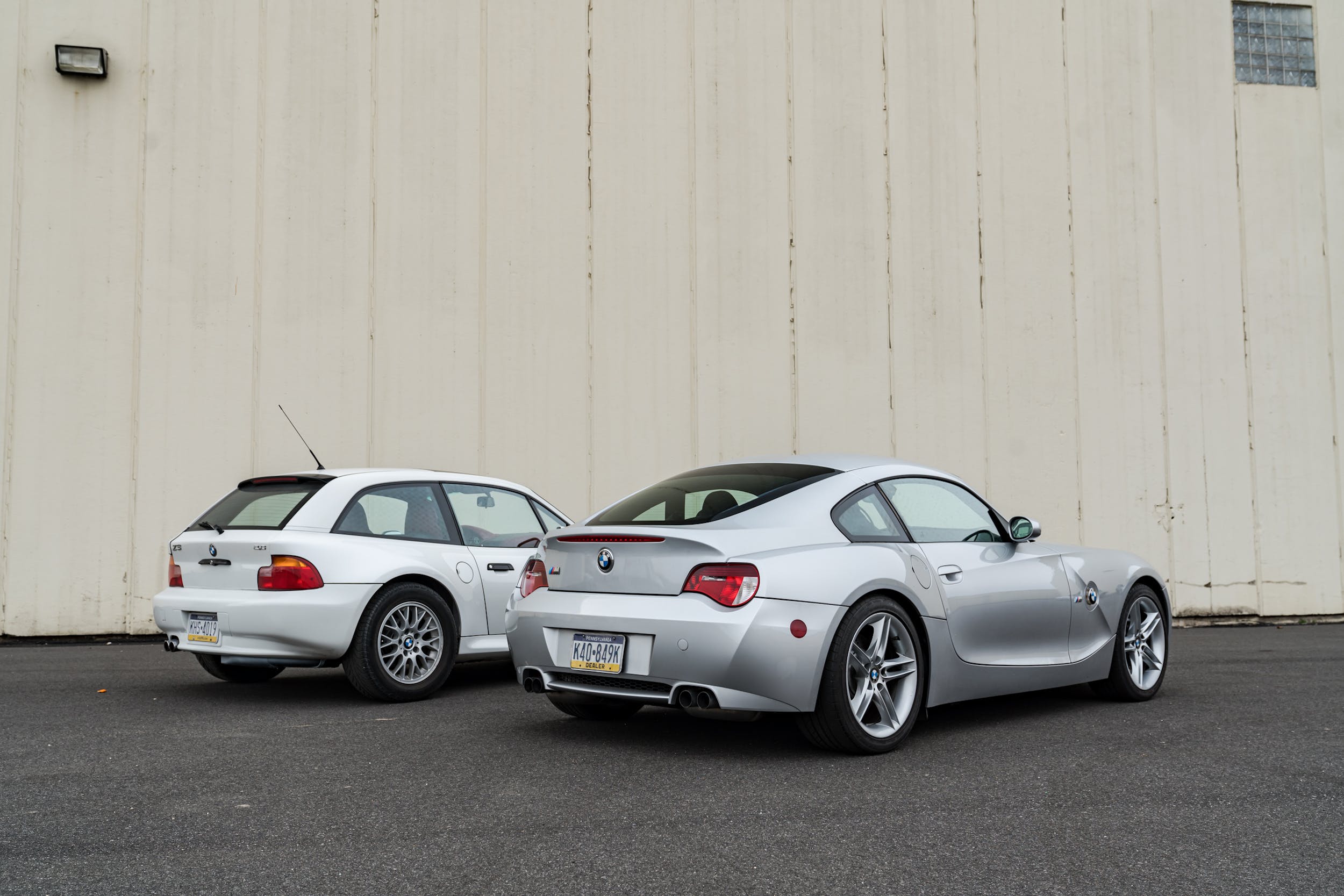 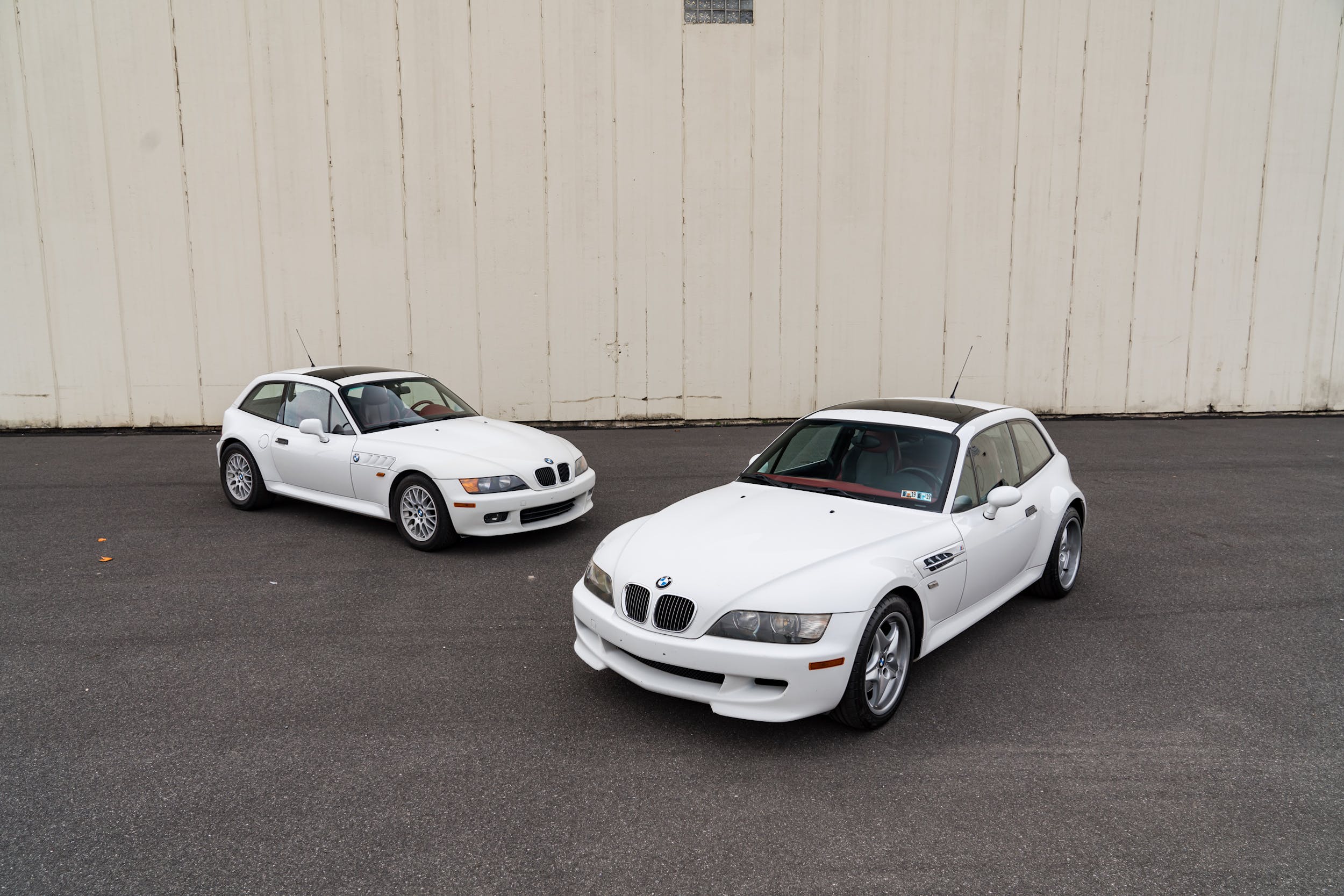 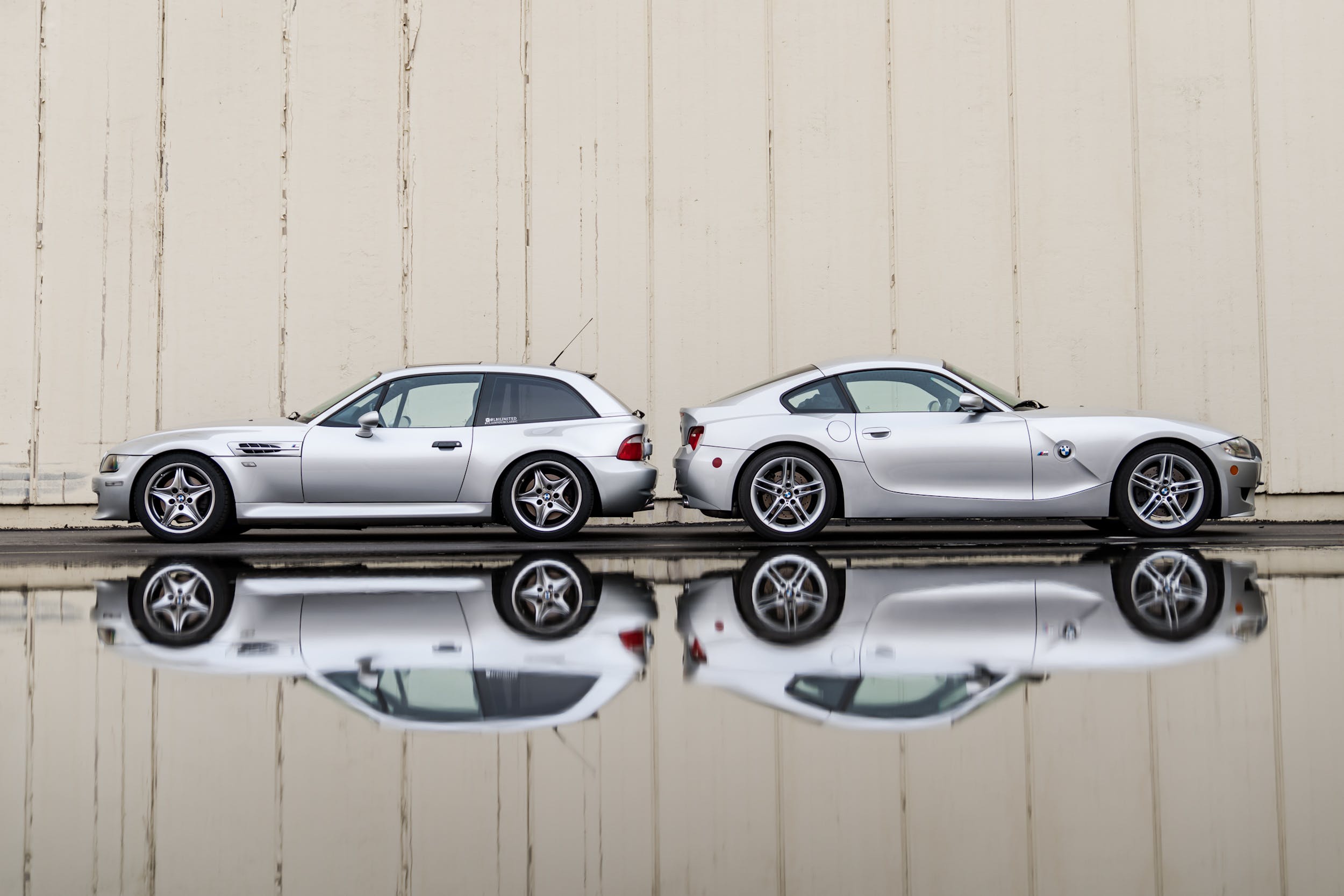 From the moment you lay eyes on an M coupe, whether a Z3 or Z4, your heart starts to flutter. The Z3 MC looks unlike any other car ever made. With the long, rounded bonnet, the front possesses a classic look other cars of its age simply don’t have. Then the steep hatchback coming down between the MASSIVE rear hips tells you that this is a serious car, a car built to be able to handle many situations, but no matter what, they will all be sporty.

Conversely, the Z4 MC has a much more refined and elegant look. The longer you study it, the more exotic the look becomes. The notch on the hatchback has been slopped, the bonnet widened and flattened, aero lines added to the entire car, and the rear fenders being squared off somehow are just as polarizing as the hips on Z3 MC.

The interior on the Z3 MC is very airy, with sculpted design cues and circular gauges throughout; it again feels older and more of a classic than it really is. The Z4 MC interior by contrast is sophisticated, clean, simple, and focused  toward driving. The larger a person you are, the more comfortable you will be in the Z4 over the Z3. 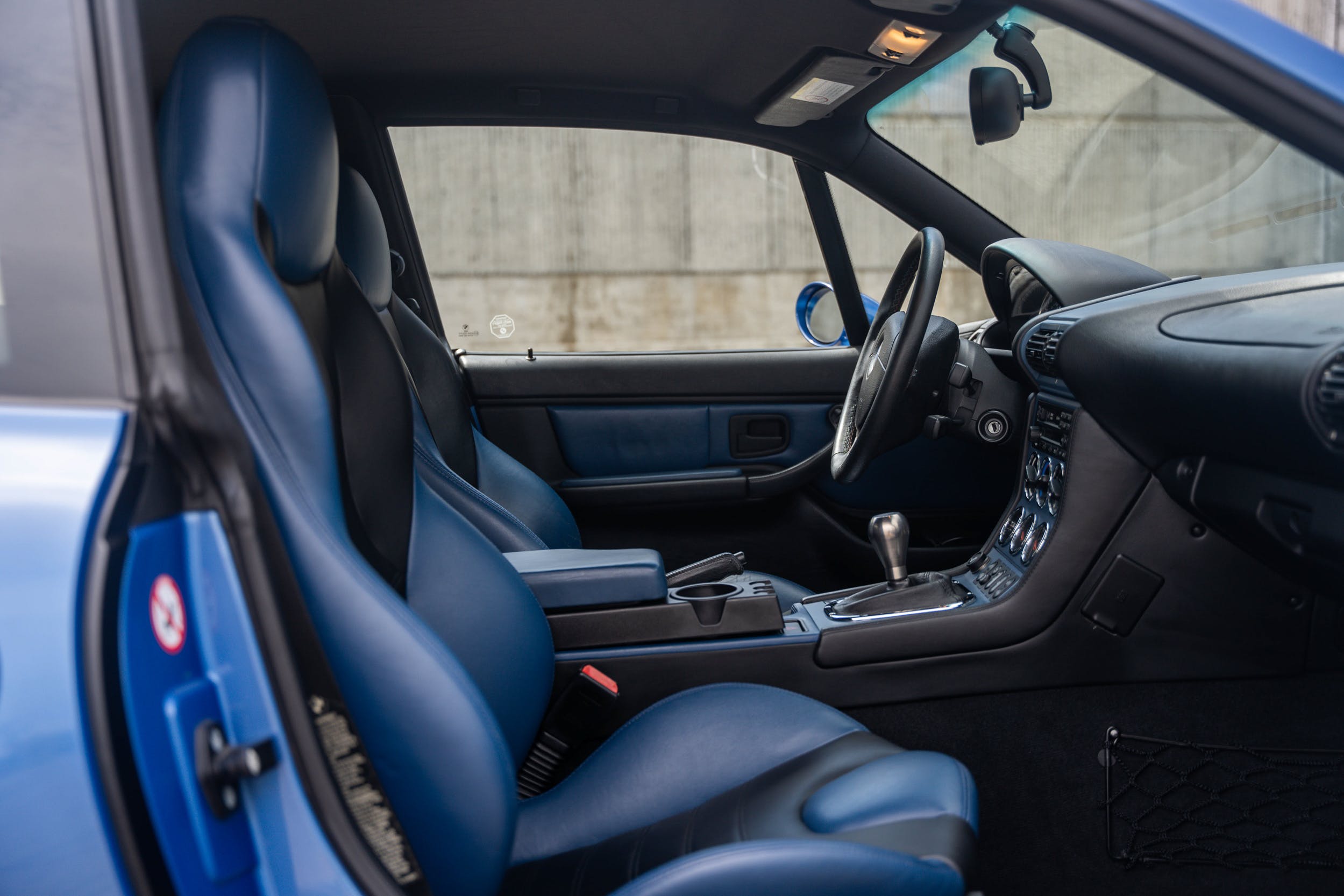 Experience is what we, as car enthusiasts, are after. The S52 engine in the early Z3 M coupes (99-00) is a solid and reliable engine. It revs out nicely with plenty of power for a daily driven sports car and there’s no faulting it. However, the final two model years of the Z3 M coupe and all Z4 M coupes feature one of BMW finest creations, the S54. simply put, it’s a race engine capable of street use. With the addition of independent throttle bodies, a higher compression ratio, and revised heads; you know there’s something special lurking underneath as soon as you turn the key. The S52 makes any car great, whereas the S54 makes any car feel as if it were built around the engine. Our money is on the S54 cars, but you honestly can’t go wrong with either. When it comes to the driving experience, the Z3 MC again, feels older in some ways than it really is. When you take off, you’ll first notice that the chassis has massive amounts of squat under acceleration (sitting on the rear wheels emphasizes this feeling). When you then hit the brakes hard for the first time and point the car into the corner,  hopefully you don’t wreck, because you will most likely cut the apex short by several feet. These cars turn in better than almost any other car I’ve ever driven. The weight of the cast iron block over the front wheels gives you tremendous front end grip, and the trailing arm suspension from the BMW E30 lets the rear get light and  rotates the car instantly. I’ve never been able to trail brake a car into a corner like I can the Z3 MC. When you go to accelerate out of the corner, think Porsche 911. The rear end squats, locks in the rear tires, and as long as you’re gentle with the 315hp engine, you can just keep adding the power on the way out. This car does not need to be driven to the limit to be engaging though. Simply driving around town at normal speeds is still a joy and a treat. If you take all of the old things you love about a vintage sports car and  combine them with what you love about a modern sports car, you  have the fundamental recipe of the Z3 M coupe, plus some. 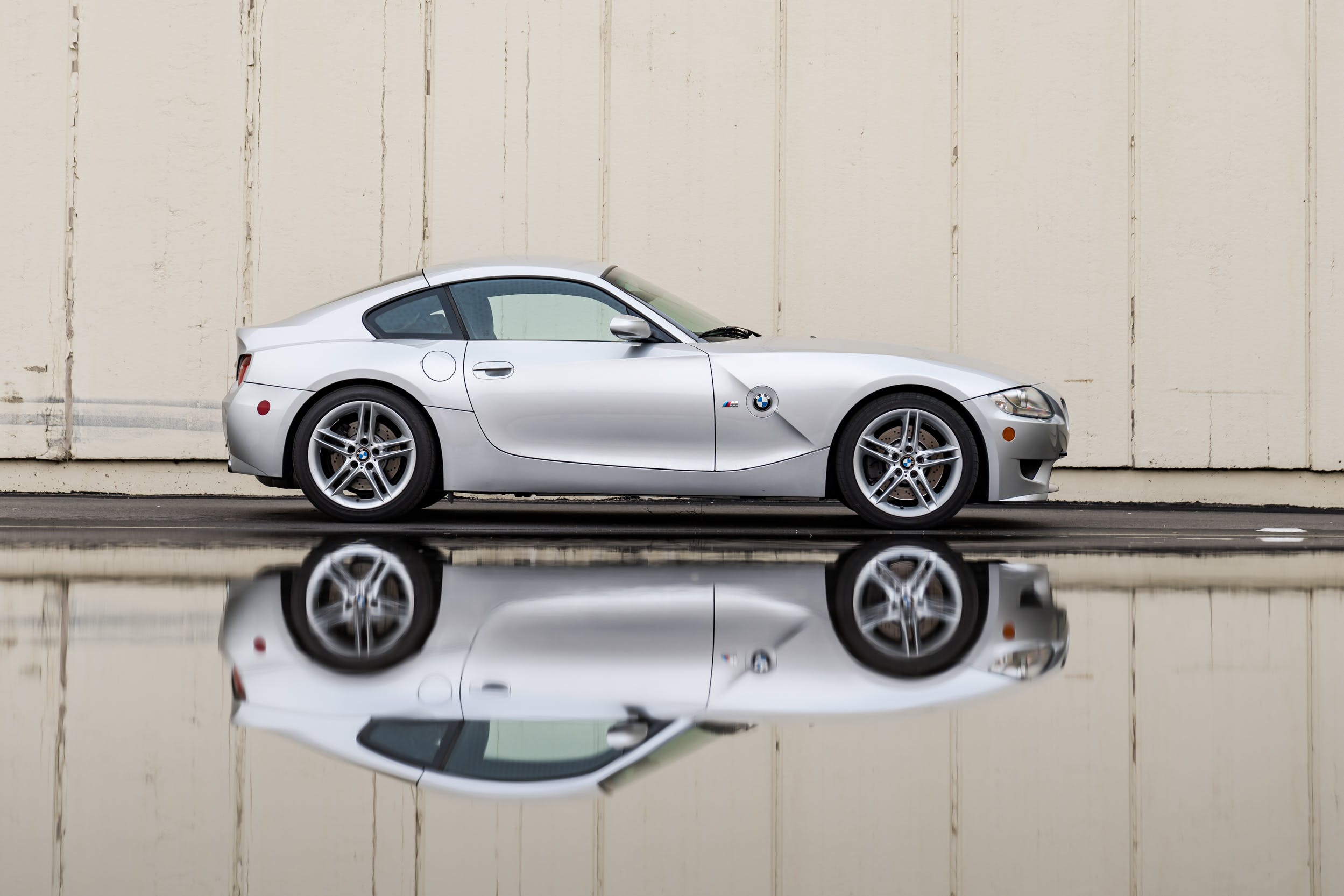 Getting behind the wheel of the Z4 M coupe couldn’t be more different despite how similar these cars appear on paper. The first thing you will notice is how luxurious the car feels. It’s quiet, sophisticated, takes small bumps well,  and the transmission just clicks between gears. No matter  what RPM, the 6spd means you have plenty of power at all times. Besides being firm over big bumps, you wouldn’t really know what lies beneath while casually driving around town. As soon as you open her up though, prepare to spend the rest of your day hitting as many back roads as you can. The braking, rev matching, corner diving grip, and high speed stability of this car is shocking. These things combined with the S54 engine give you a Porsche GT car feel. You will quickly realize that while capable, the back end of this car makes it a bit wild and is something that takes time to learn and tame at the limit. Anyone can drive an M3 smoothly. The Z4 MC though, requires skill and patience. As we enter the age of cars that do most of the tricky driving for you, it’s really fun to be able to keep up in a modern car that still requires a skilled hand behind the wheel. The speed of this car will shock you. The comfort and refinement might shock you even more.

As a car enthusiast from birth, I’ve contemplated owning just about every car. My experience with vintage Alfa’s early on combined with a love affair of BMW’s that then turned into a Porsche addiction has left me indecisive about my future automotive desires. If you love the soul of an Alfa, the practicality and drivability of a BMW, and the feel of Porsche close to the limit, an M coupe is the car for you. I have not found any other car that checks off so many boxes as M coupes do. I rarely see one at cars and coffee or any car show for that matter. I’m not afraid of them breaking the bank account through maintenance and upkeep, as they are simple and DIY friendly for the home mechanic! They give you tons of positive attention on the street without some of the negative attention that can come from owning a beautiful red Ferrari.  Lastly and perhaps most importantly, they can be used for everyday errands in the morning and hammered around a racetrack all afternoon while still leaving room for the driver to grow. The biggest thing is they make you smile all the time. Finding yourself in your favorite collector car only to be burdened by an unrewarding road or bout of traffic is most certainly the worst of situations. The beauty with the M Coupe is that will never happen, ease of enjoyment comes in spades.