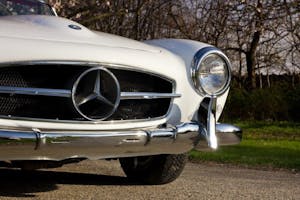 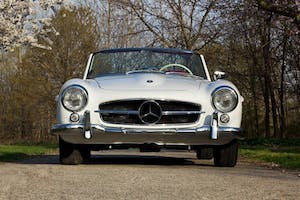 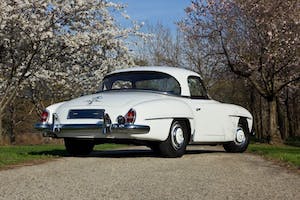 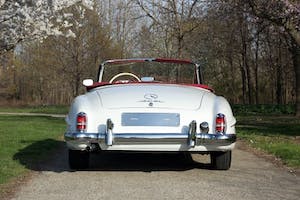 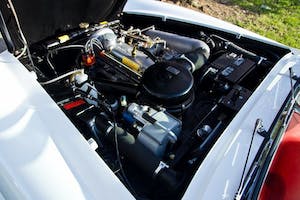 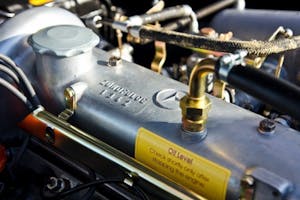 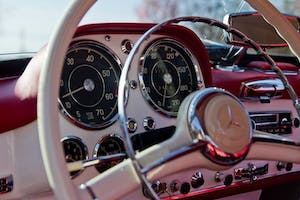 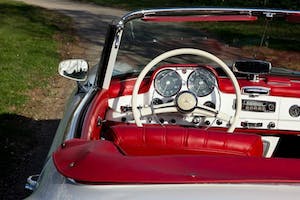 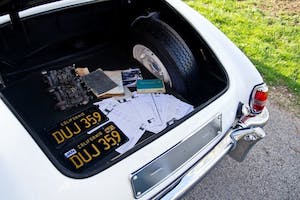 The Mercedes Benz 190SL is today what it was when introduced in 1954 at the New York Motor Show: A less expensive, more practical, and smaller version of the illustrious 300SL. However, it is certainly not lacking in any of its big brothers technical refinements. The 190SL offered plenty of capability and race-bred technology to those enthusiasts considering a sporting roadster. From its production in 1955 through its replacement with the 230SL in 1963, nearly 26,000 would be produced with only a fraction in existence today. The 190SL was also the start of the “options list” for Mercedes-Benz. Never before could a car be tailored like a fine suit the way a 190SL could have been. Everything from elaborate color schemes, tops, accessories, seats, and even a very rare sports-racing option was available. These nimble little two seat roadsters with their iconic, forward styling were the first Mercedes-Benz convertibles to hit home with the U.S. market and started a full-fledged frenzy, and one that has yet to end over 58 years later.

The example on offer here, Chassis # 12104010017435 is presented today as a fantastically well-restored 190SL and adheres to its original build specifications. Thanks to The Mercedes-Benz Classic Center and the accompanying Chassis Zertifikat, we know that this example was delivered exactly as follows per its original Data Card:

Engine number: 121 921 10 017544
Transmission number: 017680
Front axle number, l: 17650
Front axle number, r: 17634
Rear axle number: 010057
Steering box number: 17492
Exterior color code: 658 – ivory
Option Codes:
401- Single seats
441- Bumper with guards, front
515- Becker radio set “Europe” USA
320- Outside rearview mirror, on the left, loose
Early history on this example shows that it was a European delivery and by 1966 was in the hands of its second long term owner in California. The original service booklet shows that in 1966-1972 the car was regularly serviced by both Mercedes-Benz of San Diego, and Adams Foreign car service, as documented in the original book. From this point forward there are numerous receipts from foreign car repair shops in the San Diego area that kept the car in order from 1972 until about 1991 where it was put away in dry storage, and driven seldom, until 2001 when it was serviced once more to be readied for sale. In 2003 a Mr. Bob Friedman of Nevada acquired the 190SL out of 40-plus year ownership as the third owner, with restoration in mind. Upon his acquisition, Mr. Friedman entrusted the services of Bell Straus Restoration of Costa Mesa, California to carry out a total restoration of this 190SL to as new condition.

As a totally numbers matching example, in good original colors, and with the benefit of being a straight and totally solid California car from nearly new, it doesn’t get much better in terms of a car to restore. The fact is this car has always been a good, solid, rust-free and accident-free example, which for a 190SL is indeed a rare thing. As restoration began in 2006 the entire car was completely disassembled, drivetrain removed, paint stripped, and the car was soon a completely apart and a bare chassis. Receipts in excess of $80,000 for services performed entail a total rebuild of the engine, transmission, rear end, brakes, steering and suspension as well as ancillary components. The chrome was completely refinished as new and the car received fresh and correct DB658 Ivory paint. Reassembly included a brand new interior to exacting and correct specifications, down to all of the little chrome items and most minute details. It shows superbly and is easily concours quality. Final assembly included a new and very correct German canvas top, all rubber components and nicely finished with a hardtop and new boot cover.

Since completion this 190SL has been enjoyed for only 1,602 kilometers (or about 900 miles) making this a very fresh example with merely break in/sorting miles attributed to it since completion of the restoration. As a nearly new example it is easily eligible for MBCNA events, concours and rallies and can be enjoyed as a well-sorted and restored example with no needs other than an enthusiastic owner. The car starts instantly, runs well showing strong oil pressure and very quick throttle response thanks to updated Weber carburetion (The original Solex carburetors are included in the sale). Going around a corner comes with ease as does stopping and accelerating. Having the benefit of being totally rebuilt throughout this 190SL is indeed quick, nimble and responsive and all-round well-suited for immediate use with excellent road manners. It is everything one would expect from a well-restored and concours quality example.

The fit and finish throughout should also be noted as excellent, the body is straight down the sides with good shut lines and panel fitment throughout. The chrome gleams and all of the accompanying rubber pieces are supple and nearly new as well. The glass is free from any defects and the interior is nothing short of new, but also shows as highly correct right down to the Becker Radio. The engine bay is another item on 190SL’s that warrants much attention from any discerning buyer. It has been nicely detailed and when restored there was quite obviously a lot of attention paid to items regarding correctness and presentation. Of which no corners were cut and the engine bay shows exactly as it should on a correct and well-restored 190SL.

In conclusion, this is an opportunity worth much consideration by any collector or enthusiast who is in the market for a finely restored 190SL. Factor in documented and known California history from new, limited ownership, two tops, original books, jack, spare and a totally documented history/restoration and one has a real opportunity to acquire a concours quality example, and a truly great car. The rising market tide has seen much recent appreciation for the “miniature 300SL” with no real end in sight. This will no doubt be an opportunity to buy a very good car to be enjoyed, but also will likely prove to be a wise investment as well.